This is Part 1 of a two-part series that explores the effects of neighborhood school closures. As nothing is ever black and white, neither is making the tough decision to close a school…nor the effects of that decision. Part 1 focuses on some of the emotional and physical effects. “Part 2: The Silver Lining,” to be published in May, will focus on what districts can do to mitigate the potential ill effects.

I remember many nights spent walking the short distance to my children’s schools for Halloween carnivals, Christmas programs, Back-to-School nights, etc.—where children ran and laughed on the playground while grownups chatted about gas prices or whatever else they could find “wrong” with the world. My children went to the three schools in our neighborhood—the elementary, middle, and high school—unlike their mom, who moved a lot as a child and always had to start over in different schools. I’m happy that they never had to master the art of continually making new friends, although I never really did master it. But moving a lot definitely gave me an appreciation for stability, routine, and community.

There are several reasons why school districts are faced with making the tough decision to close a school. Poor performance is a common reason; other reasons include low enrollment, outdated facilities, and funding shortages. But no matter how difficult the decision, the potential effects of closing a neighborhood school can be devastating. In Part 1, we uncover some of the aftermath.

One doesn’t need to listen to the We Live Here podcast or view the 2013 Chicago Public School Closings video that features a family desperately trying to save their school to understand the emotional turmoil surrounding the closure of schools in people’s neighborhoods. Just imagine your own children’s school shuttered (the term used for closed).

Chastity Pratt-Dawsey, who grew up in Detroit, talks about how the school and her community were so closely intertwined—

…the school was the community center, you went there after school for community meetings, of course your parents vote there. Especially the high schools, right? The high schools are the center of your neighborhood… And now people say, ‘Where’d you go to high school?’ And you’re talking about a school that no longer exists… So, it destabilizes the neighborhoods.

Detroit Public Schools shut down 195 schools in less than 15 years.1 That’s a lot of destabilization.

Studies have shown that when neighborhoods lose a school, it can hurt property values and tax revenues. Public schools are gathering places that may be sites for other social services such as parent education, job skills classes, health services or distribution points for donations. When students have to travel farther to school, even by half a mile, it can lower participation in enrichment programs and make it harder for parents to get involved.2

Along with the emotional effect of a school’s closing comes the visual wasteland in some cases. “Sadly, once the schools close, many of the buildings remain vacant, breeding crime and hemorrhaging resources.”3

A woman in this video talks about how the shuttered school in her neighborhood, Ada Lewis Middle School, which was closed in 2008 and remains vacant today, is a “magnet for negative activity and if someone is over here drinking and doing drugs, it can easily spread on down the street to the neighborhood.”4

Because it can be difficult to sell or lease these empty buildings, many remain costly eyesores. The challenge of finding new uses for old buildings is daunting, and the downside of letting them sit idle can be significant. Since 2005, the 12 districts have sold, leased or reused a total of 267 properties and still have 301 unused sites on the market, empty buildings that can cast a pall over their neighborhoods and be costly to seal, maintain and insure.5 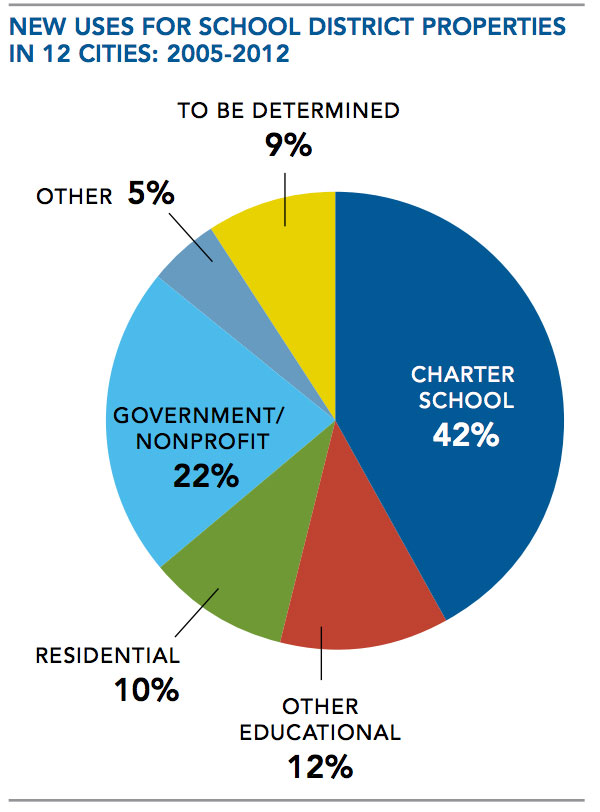 Many families also choose to move out of the neighborhood in search of better schools because they don’t like the “welcoming schools” their school district has chosen for their children. This further contributes to the deserted feel of the neighborhood once the school closes.

Caroline Bauman says our assumption that students from low-performing shuttered schools will end up in better ones isn’t always the case. “Students who came from about half of the [21 Memphis schools the city closed in 2012] have been re-zoned to schools that either were academically on par or actually performing worse.”7

Avi Wolfman-Arent talks about a new study that was done during the time that Philadelphia closed more than 10 percent of its traditional public school buildings and displaced thousands of children between 2012 and 2013:

When students relocated to schools with good scores on the statewide English exam, their scores on that same exam went up. The problem, though, is that many students didn’t end up at these high-achieving schools. The worst results occurred when large numbers of displaced students arrived at a new school together. In scenarios where displaced students made up a quarter of all children enrolled at a receiving school, things went south. The displaced students performed poorly on standardized tests, and their new peers at the receiving schools also suffered academically. Steinberg believes that in these cases the district was merely replicating the conditions that had plagued the now-closed schools — a result that seemed to hurt all involved.8

Many resources agree that more support needs to be given to these welcoming schools to help them rebuild school culture.

As Grace Chen says in Why Public Schools Across the Country are Closing Their Campuses, “We are facing a new era in public education in this country, and the results of the changes, including school closures, will certainly be interesting to witness.”

Merriam-Webster defines a silver lining as “a consoling or hopeful prospect.” Unfortunately, the connotation is such that we cannot find the silver lining without first knowing the pain, heartache, sadness, despair, etc. from which we need to be consoled or to find some hope.… We must walk through it and figure out how finding that silver lining is going to happen.

1. We Live Here: A neighborhood school on the brink of closure
2. Americans Oppose School Closures, But Research Suggests They’re Not A Bad Idea
3. When A Public School Closes
4. Philadelphia’s Shuttered Public Schools
5. Philadelphia and Other Big Cities Struggle to Find Uses for Closed Schools
6. The Struggle to Bring Old Buildings New Life
7. Analysis: Memphis students from closed schools don’t always go to better ones
8. What happened when Philly closed 30 schools?