This is Part 2 of a two-part series that explores the effects of neighborhood school closures. As nothing is ever black and white, neither is making the tough decision to close a school…nor the effects of that decision. “Part 1: The Aftermath,” published last month, focused on some of the emotional and physical effects. Part 2 focuses on what districts can do to mitigate the potential ill effects of school closures.

“It hurts to look at the clouds, but it also helps, like most things that cause pain.” ― Matthew Quick, The Silver Linings Playbook

Merriam-Webster defines a silver lining as “a consoling or hopeful prospect.” Unfortunately, the connotation is such that we cannot find the silver lining without first knowing the pain, heartache, sadness, despair, etc. from which we need to be consoled or to find some hope. As Shakespeare says, “ay, there’s the rub!”1 We must walk through it and figure out how finding that silver lining is going to happen.

As revealed in Part 1, closing a neighborhood school can be a very emotional and confusing time for parents and children, especially if they’ve gone to those schools for generations. So how can districts help to mitigate the possible ill effects of these school closures?

We looked at the consolidation through the eyes of the students, of course, but we knew we couldn’t forget the parents; we needed to understand what they were feeling and reassure them. One George Washington parent who was involved in the school came to tears at every board meeting. She worried that she would not be able to be as involved at Poestenkill. To her, all those years of hard work would end when George Washington closed. But to me, she was a new parent with great ideas, and I wanted her to understand how much she would be welcomed.2

By doing this and much more through joint social and learning activities even before the change took place, the parents, staff, and students were able to build a new school community based on mutual respect and trust. The following is a list of “Do’s & Don’ts for School Closings” from one superintendent’s perspective. 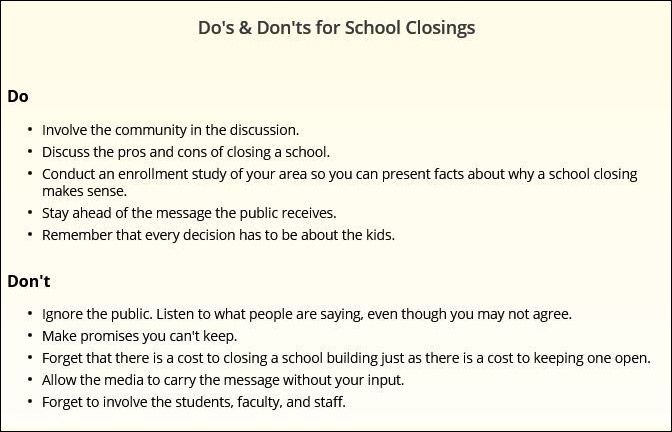 From Surviving a School Closing

Use Spare Facilities to Expand Public Education: In this Hechinger Report, Mike Griffith, a school finance specialist at the Education Commission of the States, talks about how school enrollment could decline 8.5 percent a decade from now and that along with that comes less state funding, more school consolidations, and excess real estate.

One way of contending with declining enrollments, Griffith said, is to expand public education to younger children. Griffith predicts that many school districts will increase full-day kindergarten and start offering pre-kindergarten to all families. That way districts can recoup lost state funds and use their real estate. “It’s odd. But you might be able to provide pre-K and break even without any additional cost to the state,” he said. That would be a silver lining.3

A silver lining indeed! Full-day kindergarten and pre-K offered at the public school level would lessen parents’ need for paid childcare at preschools and other daycare centers.

But what about the benefits of pre-K for children at the public school level? According to Joshua Gowin, Ph.D., “The best time to provide someone with valuable life skills may be before kindergarten.”

One of the most important findings about brain development shows that the brain has critical periods for learning. If you deprive a brain of information during this crucial time, it may never develop properly; the opportunity is lost. On the other hand, some early experiences can forever enhance the development of a young brain, and potentially change behavior across an individual’s lifespan.4

And according to a fact sheet by PEW, “High quality pre-K can no longer be considered a luxury for upper income families or a special program for the disadvantaged. Based on what we now know about children’s brain development during these crucial years, pre-K has become just as necessary as kindergarten or first grade.”5 Therefore, policymakers, business leaders, and early childhood experts cite seven reasons for making this change in public schools, some of which include research (children who attended pre-K “were less likely to be held back a grade” and “more likely to graduate from high school”), preparation (“children unprepared for kindergarten tax the resources of the entire system”), Start Behind, Stay Behind (“children who enter school behind their peers often stay behind”), No Child Left Behind (“pre-K can help schools meet these requirements”), etc. “By funding pre-K for all children, states can increase standards, require research-based practices, and offer parents choices.”

Repurpose Vacant Schools: Two sisters in Detroit—who, together with others from the community, had already brought the neighborhood park back to life after “[it] had fallen on hard times,”—do more than talk about the possibility of their school closing and what that means:

…if that school becomes empty, we look at how we can turn it into a multi-use building. But we’re not going to have a building sitting in our community, decaying, because we’re developing our community. We have our park.6

Just as they had applied for grants and pitched to city and county officials for their park renovation, districts could help to repurpose vacant schools for these neighborhoods to prevent them from becoming part of the “aftermath.”

One such repurposing project that benefitted the community in multiple ways happened because of the Kansas City Public Schools Repurposing Initiative and Tulsa’s Project Schoolhouse. Shannon Jaax, the initiative’s director, acted on the premise that “officials must be sensitive to neighborhood concerns when deciding to shutter a school and what to do next.”

Over the next six months, she and her staff held neighborhood meetings to familiarize residents with their plans and gather input about what kind of uses they should target in potential sellers.

“We integrated community participation in every level of decision-making,” Jaax said. “We hope that will lead to ultimately better results for the long-term use at the sites.”

The school district then solicited proposals for three buildings that were deemed ready to be sold; all three have been sold as of May 2012. Two were purchased by charter schools, and the other will be renovated as affordable senior housing.7 (See the figure below.) 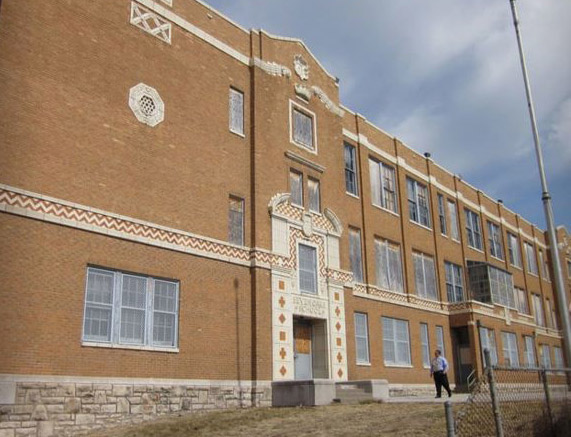 The exterior of Seven Oaks Elementary School in Kansas City, Mo. A deal is in the works to sell the school to a developer, who will refurbish it as affordable senior housing. Photo: Kansas City Public Schools (From Repurposing Schools Gives Life to Vacant Buildings)

One cannot help but be struck by the symbiotic nature of this silver lining—one facility having housed young minds in an academic setting then becoming the shelter for seniors who have come full circle. Both are very much needed in the community; therefore, there is no structural wasteland.

In a slightly different way (i.e., swapping properties), an Oklahoma City school district works with the city to ensure that neighborhoods are not “blighted” by vacant buildings:

With another two long-vacant schools, Creston Hills and Marcus Garvey, the school board swapped the properties with land owned by Urban Renewal that will provide the school district with a field next to Northeast Academy as well as land for a new south Oklahoma City school.

“We’re trying to be smarter in leveraging our partnerships to get what we need for our students while making sure we’re not leaving blighted vacant buildings in communities already struggling with these kinds of issues,” Kaye said.8

And in Detroit, the auditorium and gymnasium of the 100-year-old Burton International School was transformed into a movie theater by Developer Joel Landy when he remade the school into the Cass City Cinema. This time, the silver lining is their new silver screen. (See the figure below.)

Burton was among dozens of Detroit public schools forced to close in recent years as the district sank into debt and parents sought better education options. Now the city is getting high marks for its efforts to reuse those buildings—as churches, substances-abuse centers, housing and more. The practice also offers lessons to other districts confronting the same challenges.9 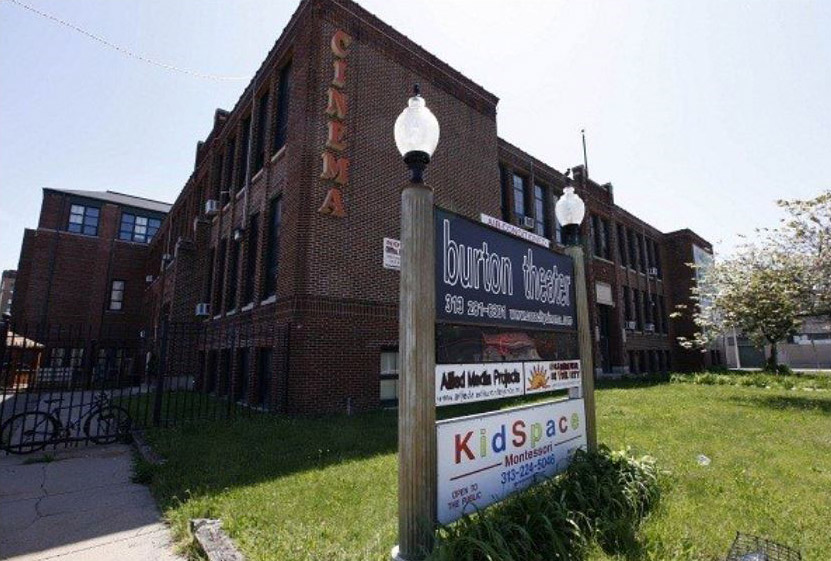 With consideration and respect for the communities of shuttered schools, school districts can add to the creativity of building new experiences for the neighborhoods and the people in them.

Provide Access to Better Academic Programs and Extracurricular Activities: “Between 2002 and 2008, the New York City Department of Education closed twenty-nine low-performing high schools and opened more than 200 new small schools as part of a series of major school reforms. At the time, the controversial move sparked community protests and even lawsuits.”10 But what a series of studies from a social policy research firm, MDRC, found was that these smaller schools graduated more students than other NYC high schools; and another study from Research Alliance for New York City Schools found that middle schoolers also benefitted from these school closures because they would have enrolled in the low-performing high schools now shuttered. One mother is happy that her children will be able to choose a different high school more suited to their varied talents and strengths.

When consolidating school districts, and especially when school closures are a part of that plan, it can be especially difficult for rural communities, yet some have found their own silver linings.

Consolidation of schools has both curricular and financial advantages. First, it often enables the consolidated schools to share courses and facilities. Sharing results in a more varied curriculum because fewer classes are dropped due to low enrollment. Expenditures for capital improvements and basic maintenance are reduced because there is no need to upgrade or maintain duplicate facilities… Consolidation of schools also can produce psychological benefits. When combined, schools often gain a confidence and an identity in the community they did not previously possess (Kay 1982). Sports programs and extracurricular activities flourish in consolidated schools because of combined funding.11

And in Arkansas, when the school district closed Hughes elementary and secondary schools to consolidate with West Memphis:

Gary Masner, the school board president in West Memphis, said the district went above and beyond to try to accommodate Hughes students. He said students have access to more Advanced Placement courses than they did at Hughes, dual-enrollment courses, and a world-class choir program with Opera Memphis. “It was the best thing that ever happened to those kids,” Masner said. “Maybe the parents didn’t particularly like it. Now they are here, and they are seeing the increased exposure they have to better facilities and better selection of courses and more extracurricular activities. The kids have thrived.”12

Sometimes the silver lining can take a long while to find. And some, unfortunately, may not be able to see it at all. But school districts and city officials can certainly work to keep the lines of communication open in the wake of hard decisions that potentially affect way more than the bottom line. And at the end of the day, members of a school district and a neighborhood community that walked through the aftermath of a shuttered school just may be sharing a bag of popcorn at the refurbished Cass City Cinema.

1. Hamlet
2. Surviving a School Closing
3. The number of public school students could fall by more than 8% in a decade
4. Getting Ahead: Why Preschool Benefits the Brain
5. Why All Children Benefit from Pre-K
6. We Live Here: A neighborhood school on the brink of closure
7. Repurposing Schools Gives Life to Vacant Buildings
8. OKC school district works with city on sales of abandoned schools
9. Repurposed Schools Offer Lessons in ‘Ultimate Form of Recycling’
10. CLOSING SCHOOLS, OPENING OPPORTUNITIES: Study Finds Closing Low-Performing High Schools Benefits Future Students
11. School Consolidation. ERIC Digest, Number Thirteen.
12. When a Community Loses Its Schools